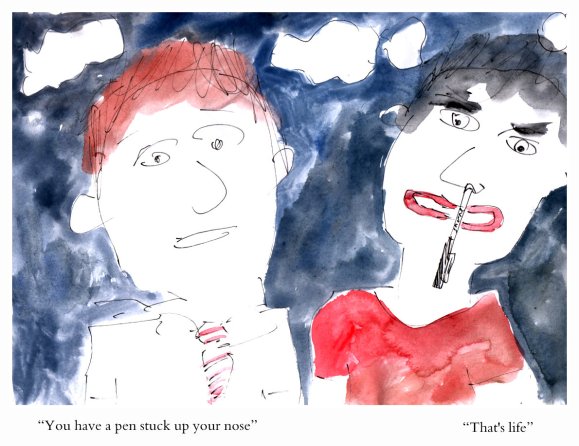 “That’s life”. My new favourite phrase, yes. I’m like a toddler with a new word. Here’s the proof:

I rent some land a few miles from my house, on which Laura and I keep Pigs, Sheep and Chickies. We also grow stuff. Anyway, to cut a long story short, my landlady of the land’s just spent a lot of bloody money on replacing a load of roof tiles on her old manor house, of which the roofers spent a lot of time dicking around on the roof and thus consuming her hard earned money.

So, I bumped into her tother day in the yard and asked her how it was all going with things, as you do in polite small talk an’ that. She responds by asking me about the animals and stuff and then she’s into comfortable territory and wants to talk about the roof. She tells me that since the roofers have left (and a fortune has been spent etc) that the house is now leaking as badly as before and how Christmas was ruined cos they had to spend the majority of the festive period away from the comfort of the main, previously liveable area of the house. I listen intently and considerately on her tale of woe and then feel the need to respond with (and I may add with a rather nonchalant grin) “ That’s life”.

She looks a bit upset so I make my regards, say goodbye and drive off.